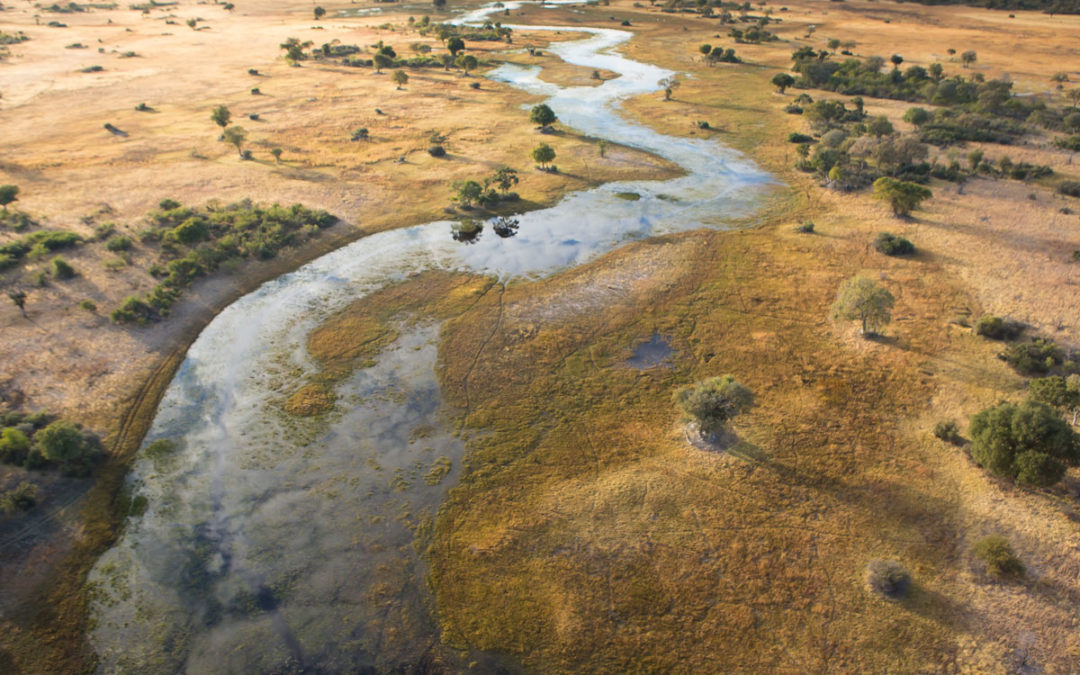 A Magical Experience with Airventures Okavango

A huge dark shape was barely visible as it slowly moved within a of the mosquito gauze. The tent flaps had been rolled back to let in the cool breeze of the night, but now I was wondering how wise that decision had been. But then, how much safer was canvas than gauze? My heart was pounding so loud it must surely have been heard by the elephant, now pausing to reach for any marulas that had fallen on the veranda.

I had been lying awake for some time, full of excitement and anticipation for the balloon flight that was to take place as dawn broke. When was that early morning call going to arrive? Hippos were grunting, a hyena was calling in the distance, bats were resonating in the trees above, and I was wide awake enraptured by the visitor on my veranda.

This is Kadizora Camp in the Okavango Delta.  “The waters are coming” everyone kept telling me, and each day the water in front of the camp was indeed steadily rising and becoming more visible. Water lilies were blooming, elephant wading in the reeds, and hippo moving closer as the water deepened. But where was that early morning call? As my visitor gently blew dust from his trunk, I heard footsteps approaching our tent, and at last, the early morning call to get up and meet for coffee at the reception tent. Woo Hoo! Our adventure was about to begin.

The balloon and its crew had already left camp before us, heading out into the darkness to prepare for the rigging and inflating of the balloon. Following their trail, the driver of the game viewer miraculously knew which direction to take, in almost total darkness, and with no apparent signage to indicate the route. The Okavango grass is high in places, maybe 2 meters in height, making visibility extremely difficult, and who knew what was watching us very close by. We huddled up closer, as night game drives are never the warmest, but our eyes were wide with excitement as was spotted in clearings, eyes reflecting in the glare of the headlights.

As the sky began to show the first signs of dawn, a new sound arose from the long grass, – was that indeed the original Rolux Magnum lawnmower mowing grass in the depths of Africa? As we rounded a bend, my heart missed a beat, as there was our first sighting of the balloon, all laid out in a clearing, with the crew inflating the balloon envelope with cold air from a fan. I literally from the game viewer with camera in hand, the sun was rising, the in the African sky were everything that has been written about, and I wanted to capture the moment .

No sooner did my feet hit the ground, than a hushed warning reached us from Adam Fillmore, the pilot, “3 hanging around the balloon, don’t wander off, stay close”. The hyena, like most wildlife in the Okavango, naturally inquisitive, and this new balloon activity brought with it interesting smells and sounds. The crew, all being raised in the area, away the hyena, like they were nothing more than pet dogs, adding to the inconceivable uniqueness of the occasion.

The pilot assured us that wildlife probably wouldn’t come too close once he made use of the burner. And he wasn’t joking! When he lit the burner to heat up the air in the balloon, the length of the flame reached a couple of , and it wasn’t only the hyena’s that were surprised. Miraculously within minutes, as the air heated up inside the envelope, the balloon stop upright in all its beauty. Such an incredible sight, so timeless, so unique, and here for the first time, an opportunity to experience this adventure in the sky above the Okavango Delta. Could my poor heart handle much more excitement?

As we boarded this aircraft of childhood fantasies, the anticipation of what we would see and experience in the next hour was paramount. As the pilot completed his safety briefing, the balloon ascended slowly into the air, and there running below us in the long grass not 3, but 10 . Oh my word, can things get any better? As the pilot skilfully caught the wind directions of the cool morning, we drifted over , , giraffe, impala, zebra, and even sable and wild dog.

The waters of the Okavango Delta bring with it floods of grazing and browsing animals as they revel in the new greenery. The predators are never far and are far easily spotted from the air, on the ground, where the height of the grass conceals many good sightings. We drifted peacefully and slowly over the newly flooded plains, we could see the water birds in the trees, and even small creatures like jackals getting ready for a new day.

All too soon our flight was nearly over. The pilot had been preparing for our and had been in constant contact with his ground crew, who had been following the balloon in Land Cruisers. Often they couldn’t see the track ahead, and it was up to the pilot to make reference to seemingly vague directions like “head towards Ostrich Eggs” – only in Africa! With amazing punctuality, the crew arrived as we came land, skimming and burning lightly, the parachute opening in the envelope was activated, the balloon descended elegantly, the tow lines were caught by the crew who astounded us by being already in position for the landing.

Whilst the crew efficiently packed away the balloon, a table had been prepared in the bush, complete with tablecloth, glasses and sparkling wine. Upholding tradition, the pilot presented certificates to all the passengers, commemorating this momentous flight. A truly wonderful experience. A unique adventure in the professionally presented and performed by the AirVentures Okavango Balloon Safaris team.

The Okavango from a unique and thoroughly enjoyable perspective.